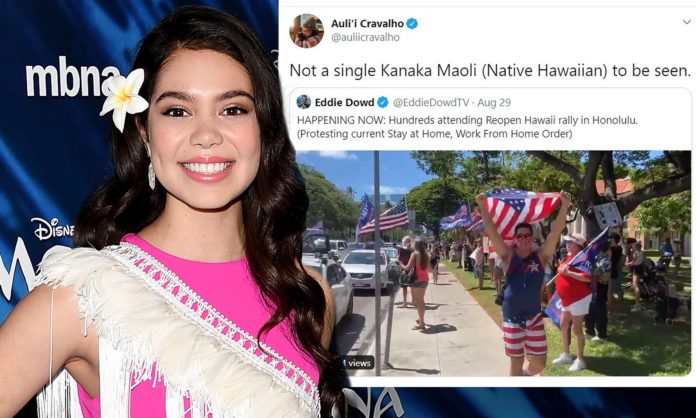 Very recently the Moana Star Auli’i Cravalho recorded her big song “Feels Like Home” in Netflix’s “All Together Now”, which has now become a sensation and trending all over social media.

Moana is amongst one of those movies; Auli’i Cravalho gave her voice for. She voiced for the onscreen lead character, Moana. The interesting fact about Auli’i Cravalho is, that she was the last person to audition out of hundreds of actresses, and was instantly confirmed by The Walt Disney Company. Auli’i Cravalho is an actress and singer by profession.

Most of us have a great love for animated movies, isn’t it? When we think of animated movies, the first name that instantly strikes our mind is Walt Disney. Over the decades the Walt Disney production house has brought many beautiful, full of life and most creative movies ever. Such movies are so heartwarming and loved by not only kids but adults too. Moana was one of those musical adventure movies by Walt Disney that has stayed in the hearts of fans forever.

Another feather is her cap!

The ostensible role in Netflix’s teen drama based on the novel is her first live-action film. Auli’i Cravalho is playing the character of a high school girl name Amber Appleton. The song, “Feels like home” from “All together Now” is sung by Auli’i Cravalho. Brett Haley, the director of “Feels like home” mentioned during in one of his interviews that, “It’s no wonder it evokes coming straight from the actress’ heart when she sings it as Rhenzy Feliz’s Ty plays the song on the piano”.

The fact that Auli’i Cravalho has been asked to produce this song for “All Together Now” shows how talented and artistic she is, besides leading the film for the first time, she is singing too, a worthy platform for her to showcase her abilities.

Auli’i Cravalho is no doubt a very talented person and there are a few amazing facts about her which really makes one think so highly of her. Before she made her breakthrough, she was living in Hawaii with her mother while she was still in high school.

During that time, as she’s always been passionate about singing so she used to sing “Soprano” (soprano is a type of classical female singing voice that has the highest vocal range) in the local club, in Hawaii.

Auli’i Cravalho’s first film, “All together now” released on August 28, 2020, and with this movie, she has made a remarkable debut in the singing world as a playback singer. The 19-year-old star has got a long way to go, it is just the beginning of her career in singing and lead actress. We wish her all the very best for her future endeavors.