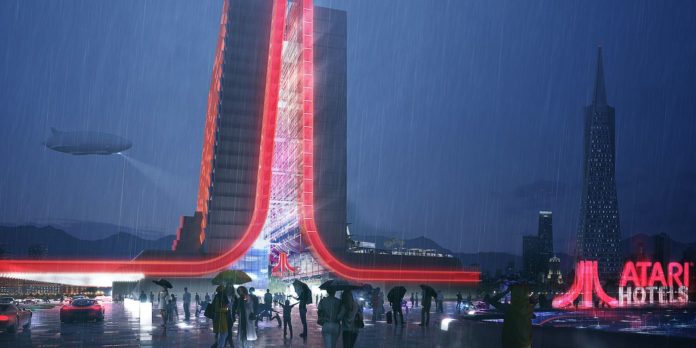 Atari is one of the pioneer video gaming companies. It was the only leading giant in the video gaming world back in the late ’70s and ’80s. The company rose to its prominence with the release of its 1977 game Pong. Though over the years, it lost its position to other tech giants such as Nintendo, Sega, and Sony, it still remains a classic.

Recently the gaming company has revealed that it is planning on opening a chain of hotels across the United States of America. The first two hotels are to be opened in Las Vegas, Nevada, and Phoenix, Arizona, followed by six more hotels in Austin, Texas, Chicago, Illinois, Denver, Colorado, San Francisco, California, San Jose, California, and Seattle, Washington respectively.

The hotels are supposed to have retro-futuristic architecture inspired by  Blade Runner and Tron, symbolizing the glorious retro time of the company. These hotels have been speculated to have separate gaming areas and places for Virtual Reality gaming as well.

The creators have announced that the hotel will cater to the needs of the general travelers too. So even if you’re the only gamer in your family, you can still enjoy the atari experience with everyone!

“You’ve dreamt of this world — now you will be able to experience it,” the press release reads. “Stylized rooms inspired by great science fiction stories. Restaurants and lounges that stimulate the senses. Retro gaming and esports venues, immersive entertainment, mixed reality programming, and digital studios. Everything we have always desired in one location is finally coming.” Atari partnered with Gensler and Subnation to build the hotels.